Share
It asks to be prepared for underperformance relative to market indices, posts 20-year real return at 3.7% for FY17

AT a time of heightened uncertainty and "investor complacency", Singapore's sovereign wealth fund GIC is expecting steady long-term returns, and says it has to be prepared to take underperformance against relative benchmarks, with some stretching into several years.

This means the purchasing power of funds invested with GIC in 1997 has more than doubled, with GIC currently having well over US$100 billion in assets under management. GIC is estimated to be the 10th largest global public investor in the Asia-Pacific, according to think tank Official Monetary and Financial Institutions Forum.

The portfolio returned 5.7 per cent per year in US-dollar terms over the past 20 years on a nominal basis.

GIC noted that the last 20 years have included two periods of very pronounced cycles. The first was the tech bubble in the late 1990s to early 2000s, while the second was the global financial crisis in 2008.

This year's decline in the 20-year real return was largely due to the drop-off of the high returns at the beginning of the tech-bubble period, while the ensuing collapse in values remains within the 20-year period. GIC expects this effect to continue for a few years, dampening the rolling 20-year figure.

In a statement, GIC chief executive Lim Chow Kiat said: "We are prepared for a period of protracted uncertainty and low returns."

He said a key part of GIC's investment strategy in such an environment is to ensure the portfolio remains robust across a range of plausible scenarios, translating to diversification across asset classes, regions, return drivers and risk thresholds.

"As a long-term value investor, we remain cautious and recognise that to generate good real returns over time, we have to be prepared for periods of underperformance relative to the market indices, some even for a stretch of several years," said Mr Lim.

A combination of stretched valuations, high policy uncertainty and unresolved economic imbalances confronts investors today. Notably, the current market pricing does not reflect heightened uncertainty. Mr Lim said: "We are concerned about that. It seems to suggest that there is investor complacency."

Given this environment, GIC has guided that it expects one to 2 per cent real return over the coming decade.

GIC continues to build investments into infrastructure, with PwC estimating US$1.7 trillion in global infrastructure spending through to 2020. GIC was part of a consortium that bought and delisted UK water utility company Kelda Group in 2008. In 2016, it bought 19.9 per cent of United States' largest independent electric transmission company ITC Holdings from Canada's Fortis Inc for US$1.23 billion.

But Jeffrey Jaensubhakij, group chief investment officer of GIC, noted that for many countries, many infrastructure projects still remain owned by the governments, leaving little room for private investors.

In places such as Australia where there is more active privatisation in the infrastructure market, sky-high demand for the assets is translating to very expensive prices.

"In emerging markets, most of the assets are still government-owned and operated. We still need to see a period of time where governments decide to privatise the assets," he said.

GIC continues to see opportunities in the student-housing market where it is among the top global investors. GIC and Singapore's Mapletree Investments have helped to push acquisitions in student housing to a record US$16.2 billion last year, data from Real Capital Analytics Inc, as cited by Bloomberg, showed.

GIC pursued more investments this year. In March, GIC with the Canada Pension Plan Investment Board and The Scion Group jointly acquired three US student-housing portfolios for about US$1.6 billion.

Mr Lim noted that there remains more focus on the student-housing segment in developed markets, as students head to top schools in certain parts of the world.

"We are always on the lookout for assets which can help us to produce a different kind of return stream and student housing is one of those. We expect to continue to be active in the student-housing market," he said.

Mr Lim said in the technology space, GIC is clear there is a "winner takes all" outcome that makes picking the right asset more important and more difficult as well.

In the last few years, the valuation of tech assets has gone up substantially compared to other sectors, though Mr Lim said there is no "bubble territory" for the sector, overall.

GIC's proportion of investment in its six asset classes was fairly unchanged from a year ago.

Investments through private equity stood unchanged at 9 per cent. Likewise, investments in real estate were maintained at 7 per cent, and investments in inflation-linked bonds kept at 5 per cent. 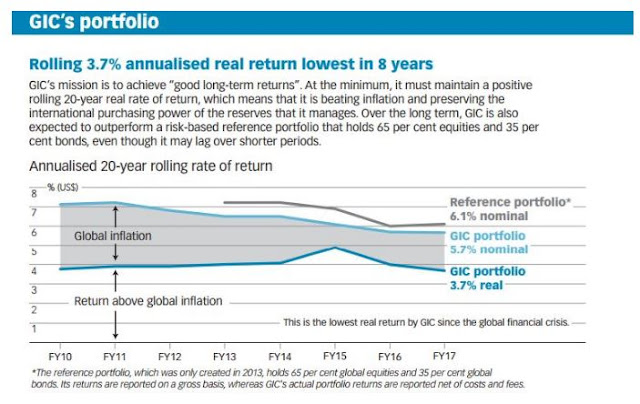 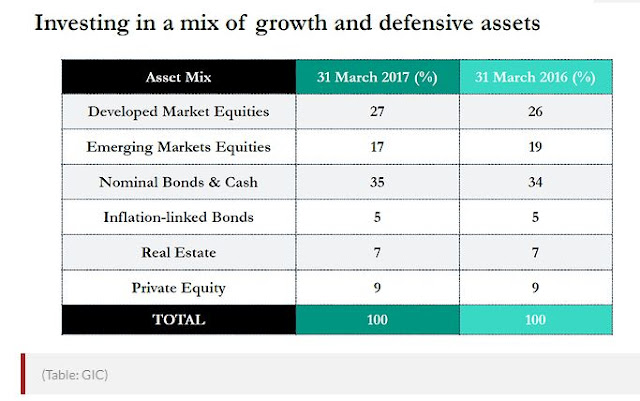 CW : Not easy to make money from investing!

GIC forgot to employ our "Gurus" who boast 15% return
to be their advisers? 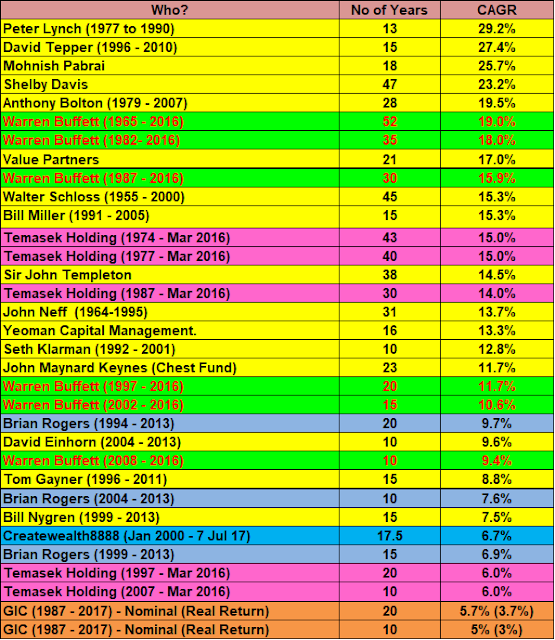