An article: Your Money or Your Life

There was a Wall Street analyst by the name of Joe Dominguez who saved enough money to retire at 31. He spent the rest of his life enjoying himself, doing volunteer work, and writing a book called “Your Money or Your Life”

We aren’t making a living, we are making a dying. Consider the average American worker. The alarm rings at 6.45 and our working man or woman is up and running. Shower. Dress in the professional uniform – suits or dresses for some, overalls for others, whites for the medical professions, jeans and flannel shirts for construction workers.

Breakfast, if there’s time. Grab commuter mug and briefcase (or lunch box) and hop in the car for the daily punishment called rush hour. On the job from nine to five. Deal with the boss. Deal with coworker sent by the devil to rub you the wrong way. Deal with suppliers. Deal with clients/customers/patients. Act busy. Hide mistakes. Smile when handed impossible deadlines. Give a sigh of relief when the ax known as “restructuring” or “downsizing” – or just plain getting laid off – falls on other heads. Shoulder the added load. Watch the clock. Argue with your conscience but agree with the boss. Smile again. Five o’clock.

Back in the car and onto the freeway foe the evening commute. Home. Act human with mates, kids or roommates. Eat. Watch TV. Bed. Eight hours of oblivion.

And they called this making a living? Think about it. How many people have you seen who are alive at the end of the work day than they were at the beginning? … Aren’t we killing ourselves – our health, our relationships, our sense of joy and wonder – for our jobs? We are sacrificing our lives for money – but it’s happening so slowly that we barely notice.

You have enough for your survival, enough for your comforts, and even some special luxuries, with no excess to burden you unnecessarily. Enough is a powerful and free place. A confident and flexible place.

Become conscious of your expenditures. Stop trying to impress people with your possessions. They are not paying attention because they are too busy trying to impress you. Pay off all your debts, including your mortgage. That’s not too hard once you reduce your expenses.

Previously, I mentioned about it. How much is enough? I estimate one with no debts and after setting aside your children education fund , 25 times your over-estimated annual expenses will be enough. With yearly drawdown and modest 3-5% return, it will be able to last a lifetime.

I am looking forward to acummulate this amount in 3 years time. Mr Market please do not be nasty to me, and do not crash another big time. Thank you Mr Market.
Posted by Createwealth8888 at 19:24 0 comments 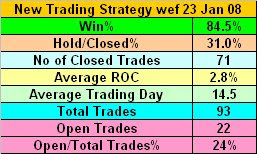