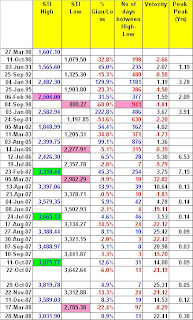 STI has staged a good recovery. Will the momentum continue?

Synear has also made good recovery and I will hold Synear for long term as history has shown that companies that have exposure to Olympic Sponsorship will have strong branding and their sales will do well.
Posted by Createwealth8888 at 09:15 1 comments 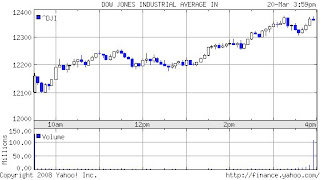 Looking at bullish closing of DOW before a long weekend and the intra day, it was real bullish buying with heavy volume. Will STI play catch up next week?
Posted by Createwealth8888 at 09:59 0 comments

One rule that we often hear as traders is to, “always use protective stops” on every trade. When I first started trading about 7 years ago, I did not use stops. At the time, I had several trades that had collapsed because of “unexpected bad news.” One bad trade would sometimes cost me 5-10% of my total account value. As I looked back at my account statements, I would think--“if it wasn’t for this 1 bad trade, I would have done pretty well this month.”

Unfortunately, I quickly realized that those “bad trades” are just part of trading; you can’t avoid them. It’s just impossible. Soon, I read some of the wonderful books by Bill O’Neil who professes that you must have a 7-8% stop on every trade so that you can never lose too much money on any one single trade. I felt enlightened. I felt that all of those “bad trades” that I had had would soon go away and that my “true” performance could finally shine through.

What I learned was that the “bad trades” did for the most part, go away, but many of my successful trades went away too. In the end, my trading performance became even worse than during the time before I was using the stops. I began “stopping out” on lots of trades. To anyone that has been through this, you quickly realize that compounding 7% (or even 2% for that matter) losses causes your account to go down fairly quickly. So even though, you can’t get “too hurt” on any one trade, you can get very hurt by lots of small losses on many “bad trades.”

This led to my next revelation. Brace yourself. What if I did the exact opposite of what I was doing? If I was dying a slow death from having “protective stops” on all of my trades--I thought... what if I got rid of the “protective stops,” and made all of of my trades have limit sell orders (for a gain).

In other words, I let my losers run, and I stopped out of my winners. Heresy! Guess what--it worked. All I did was create a trading plan that was the opposite of everyone else’s. The biggest problem with doing this, is that I couldn’t stomach it. It only made sense, that eventually I would be a loser. Well, all in all, I was a winner. But, this experience began my pursuit of a trading style without using stops.

What I learned was that I needed to learn how to manage my own risk without using stops. Using stops is asking an external tool (the stop itself) to manage your risk. You always have to pay to have someone else or something else manage your risk, and the flip side of that is that you get paid for managing your own risk.

This is the concept behind mortgage pricing. Fixed 30 year mortgages cost more because the institution is managing the risks involved with interest rate fluctuations. In contrast, for a 1 year variable loan, you as the borrower carry that risk, and you pay less for your money over the long term for doing that.

Anyway, I am digressing. In terms of the market, you need to learn how to carry your own risk. I do this in my own account by making sure that my position sizing is relatively small amount based on the variability of the stock relative to my account size.

In other words, for the time frame that I trade, 1-14 days--I look back and make sure that if the worst move that has ever happened in the last year to that particular stock happened again--it would effect less than 1% of my account equity.

On top of that I use options so that I have an absolute floor to my losses. That works for me. The end result is that when whatever position I’m in is shaking people out, I can wait patiently for my exit point (which is based on an indicator, not an absolute price).

This means that even after adverse moves, I am still, almost always getting out of my positions after some up move. I don’t sell when other are selling, and I don’t buy when others are buying. I do the opposite. It is really one of the keys to trading, to be contrarian, to be alone.

It is hard. If you don’t believe me, try going to the movies by yourself tonight--it’s just not that fun being alone. But in the market, it pays.

This is just one example of many.

Lastly, thanks to everyone who’s been writing me while I haven’t been writing. I got really tied up with taxes, work, blah blah blah.


1 Comments:
I too have learned that using stops is a great way to lose money. I have found that if I make what I think are great entries and it goes against me, I will inevitably get stopped out before it turns around and goes back up. I am very careful about not being the "greatest fool" and yet I find that almost every time the trade will initially go against me, sometimes hideously, but it always comes back. For this reason, I have found that "scaling in" works best together with patience.
Posted by Createwealth8888 at 15:27 0 comments

I am not too worry about buying STX as there will be Korean bargain hunters waiting. You only have to look at this to judge it.