Rebound back to test the LAST resistance level @ 2,635 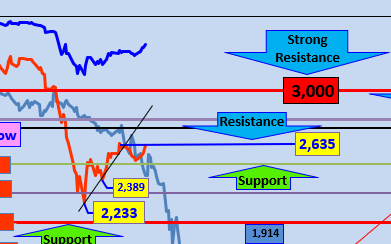 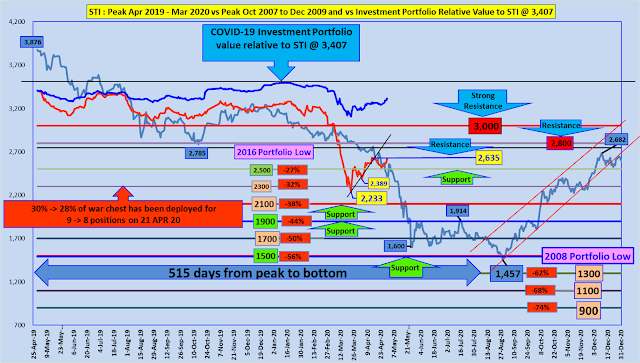 Worst Cash Flow From Investment Portfolio of Stocks In SGX Since 2009? (2)


Read? Worst Cash Flow From Investment Portfolio of Stocks In SGX Since 2009?

For his part, Gupta says cutting dividends now is “nonsensical” and “a bit of a red herring”. He notes that years of Basel reforms have left banks with “enormous capital reserves” and a clear protocol: to dip first into buffers, then counter-cyclical buffers, and finally into capital reserves.

If this is a multi-year problem... banks will likely get to the point where they can’t pay dividends. But promising now to not pay them is, to me, illogical   - Piyush Gupta, DBS

He points to the number of retirees who own a handful of treasured DBS shares, which they use to leaven their pension pot, noting that eliminating dividends “doesn’t just hit the fat cats but people who just want to supplement their pensions a bit”.


[SINGAPORE] Singapore's DBS Group Holdings set aside S$1.09 billion to cover the impact of the coronavirus pandemic as South-east Asia's biggest lender reported a 29 per cent fall in first-quarter profit to the lowest in 2.5 years.

DBS said provisions for credit losses surged in January-March from S$76 million a year earlier. They were well above an average estimate of S$605 million, according to Refinitiv data.

First-quarter profit fell to S$1.16 billion compared with S$1.65 billion a year earlier, in line with an average estimate of S$1.13 billion from four analysts, according to Refinitiv data.

DBS said it set aside the allowances "to accelerate the build-up of reserves", with two-thirds of the amount kept for general allowances to anticipate a "deeper and more prolonged economic impact from the pandemic." The remainder was for specific allowances, mainly for new exposures recognised as non-performing during the quarter.

DBS, which pays quarterly dividends, retained its proposed dividend of 33 Singapore cents per share for the latest quarter.

Two large gap down to be covered and then the worst may be over and wait for Temasek @ $7.35 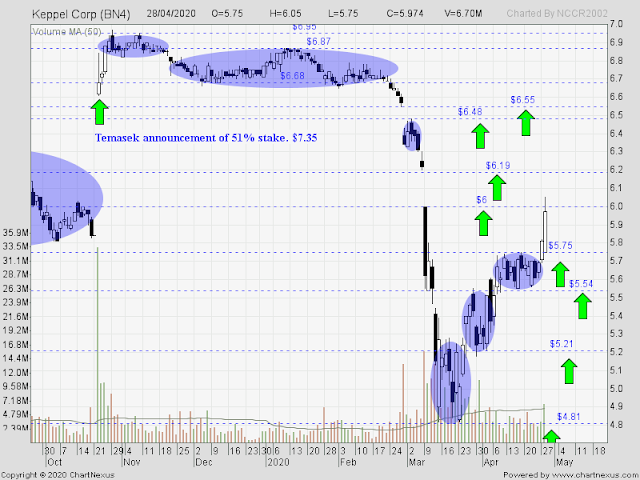 
Walan! Lucky; this is not sold to retail investors in SG by banks here.

More than 60,000 individual investors involved in the scheme have lost deposits worth as much as 4.2 billion yuan, it said. A third of the total had invested more than 50,000 yuan each.
Posted by Createwealth8888 at 20:52 5 comments

Monthly Household Expenses For Apr 2020 Is At Historical Lowest. A taste of life that is "suck" or "stuck"???


Next week STI will be testing 2,500 during Q1/Q4 earning result announcement! 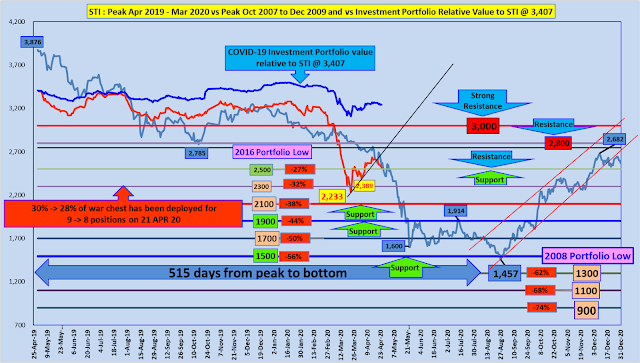 The stock market is weird. (2)


One buys, another one sells, someone waits and all three think that they are smart.

Read? The stock market is weird.

We can really witness such weird behavior in investing/trading forums!

Go and see for yourself. LOL!

My Investing During COVID-19 Bear 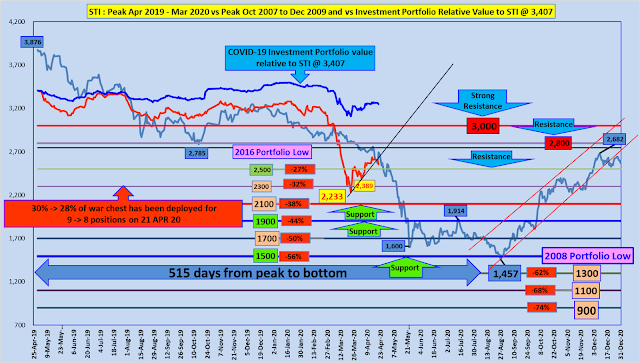 
Read? Why Not OCBC?

CW8888: Unprecedented craziness in the market and anything could happen can happen! Never say NEVER in the market.

A futures contract for U.S. crude prices dropped more than 100% and turned negative for the first time in history on Monday, showing just how much demand has collapsed due to the coronavirus pandemic.

But traders cautioned that this collapse into negative territory was not reflective of the true reality in the beaten-up oil market. The price of the nearest oil futures contract, which expires Tuesday, detached from later month futures contracts, which continued to trade above $20 per barrel.

West Texas Intermediate crude for May delivery fell more than 100% to settle at negative $37.63 per barrel, meaning producers would pay traders to take the oil off their hands.


This negative price has never happened before for an oil futures contract. Futures contracts trade by the month. The June WTI contract, which expires on May 19, fell about 18% to settle at $20.43 per barrel. This contract, which was more actively traded, is a better reflection of the reality in the oil market. The July contract was roughly 11% lower at $26.18 per barrel.

The international benchmark, Brent crude, which has already rolled to the June contract, settled 8.9% lower at $25.57 per barrel.

A key benchmark of US oil prices plunged to a 21-year low on Monday, amid continued fears about oversupply in the market.

Brent oil futures (BZ=F), the international benchmark, were more resilient. Brent was down just 2.2% to $27.46 per barrel at the same.

“The steep fall in the price is because of the lack of sufficient demand and lack of storage place, given the fact that the production cut has failed to address the supply glut,” said Naeem Aslam, chief market analyst at Avatrade. 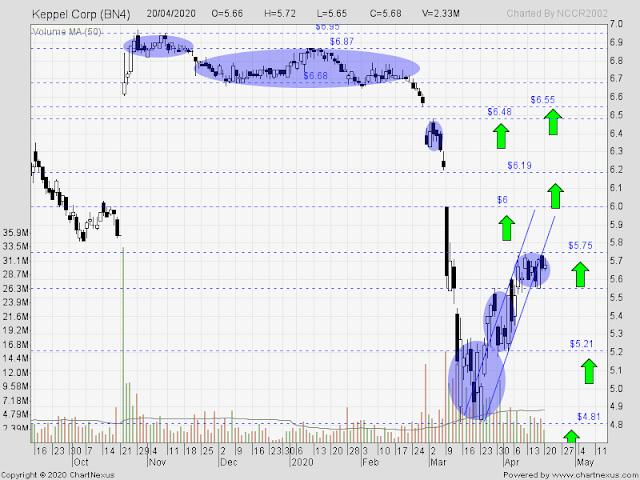 
Now, it is the right time to validate those years of thinking on sustainable retirement income for life - three taps solution model! 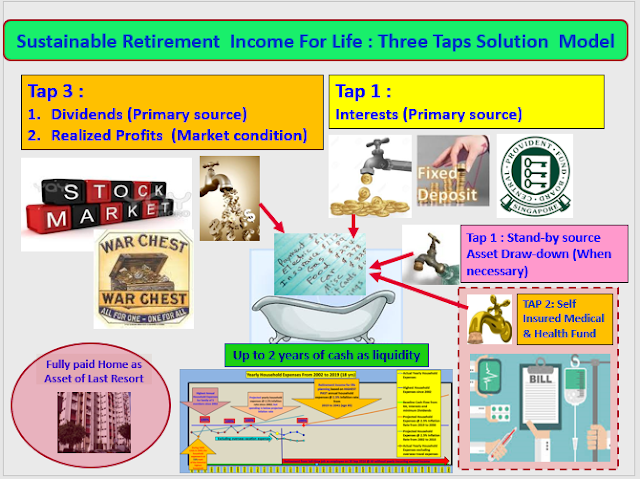 Timeline: How the COVID-19 outbreak has evolved in Singapore so far

Read? Timeline: How the COVID-19 outbreak has evolved in Singapore so far

SINGAPORE: It has been more than 12 weeks since Singapore reported its first COVID-case on Jan 23 – a 66-year-old Chinese national who came to Singapore three days earlier.

Since then, there have been more than 5,000 cases and 11 deaths in Singapore from the disease, which was first detected in Wuhan, China.

This is how the outbreak has evolved in Singapore so far:

Dec 31, 2019: A cluster of severe pneumonia cases in Wuhan, China is reported to the World Health Organization. Doctors do not yet know its cause.

Jan 2, 2020: Singapore’s Ministry of Health (MOH) says it is aware of the cases in Wuhan and will screen all inbound travellers from Wuhan from the evening of Jan 3.

There are no cases in Singapore.
Posted by Createwealth8888 at 09:16 4 comments

It is me and Mr STI!

Can't afford to miss it!

The economy is dying but is the Cat dead yet?

Look like the cat is still struggling to live. Not dead yet?

Look closely at GFC, can you spot those DCBs? 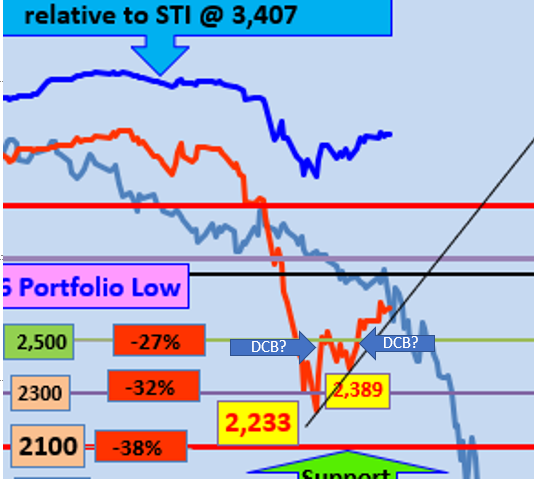 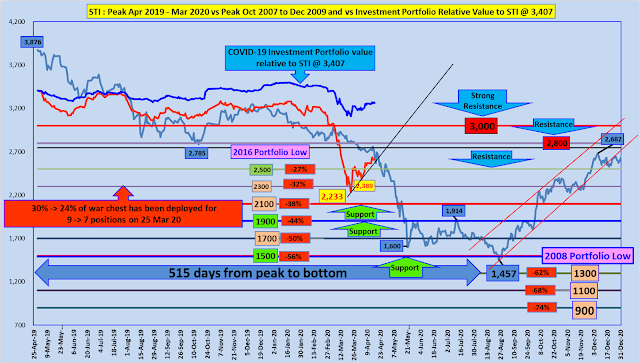 
Read? STI : Anyone still thinking it is dead cat bounce???

The answer will soon be revealed by Mr. STI!

Open your eyes and see closely! 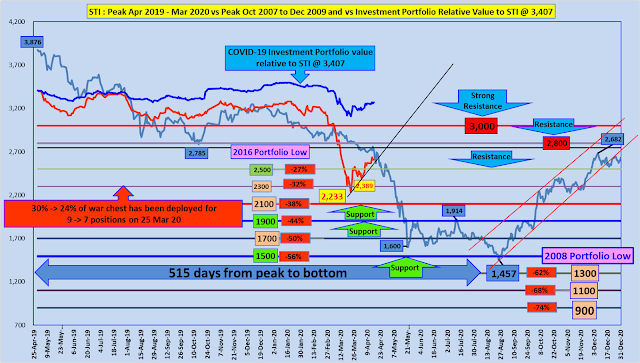 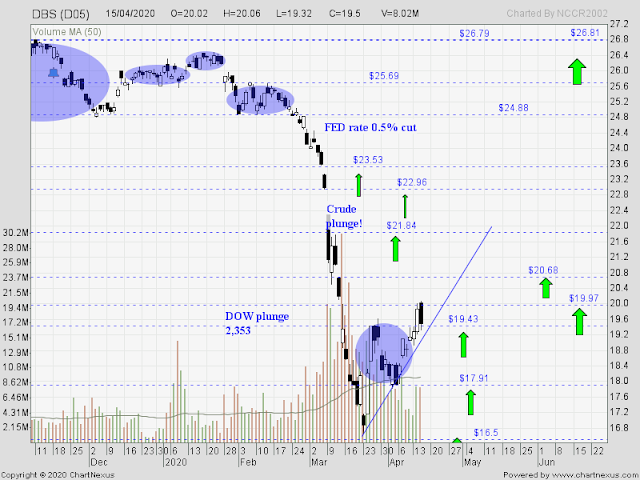 The Mind Part Is Never Easy Even For Veteran Retail Investors!!!

Read? On why sound investing principles will always work???

Real life example of retail investing. It is never easy! Who can analyze that DBS drastically raises its dividend from past year of 66 cts to $1.20 from 2018 onwards!

Institutions invest along with their rules and policies; but for retails it is all in their Mind and Heart!

Checked yesterday and heard that he didn't bought back any last sold DBS yet as he is still thinking worse for COVID-19 Greater Bear is coming soon!

This Fear is far greater than the fear in Jan 2016 and freezes him completely!

STI : Anyone still thinking it is dead cat bounce??? 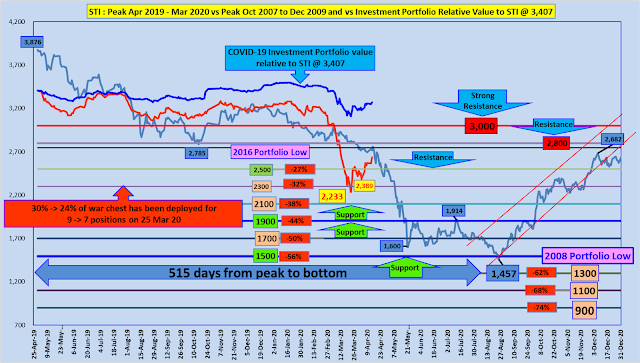 Possible To Lose 90% of Wealth Through Higher Leverages ???


Read? Margin Calls? No Scare! My Leverage Is Low And Far From Margin Call. Steady OK?

I am so ashamed to admit that I lost about 90% of my wealth in the last few weeks when all my investment bankers forced sell a large portion of my wife and my holdings.

Worst Cash Flow From Investment Portfolio of Stocks In SGX Since 2009?

Anyway; household expenses in 2020 will also drop since there was no overseas travelling expenses since Jan 20 and that will help to balance out the cash flow,

Stay at home and cheering the Market???

More like the Cat is doing bungee jump and bounce back??? 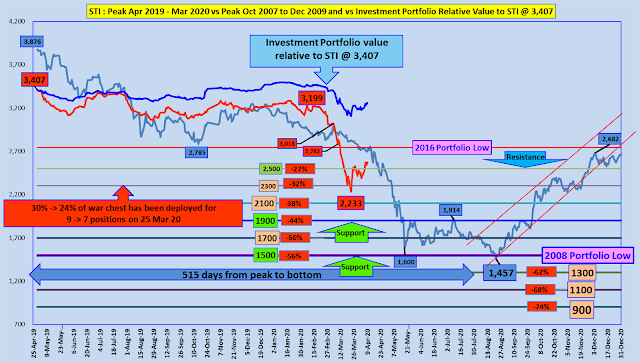 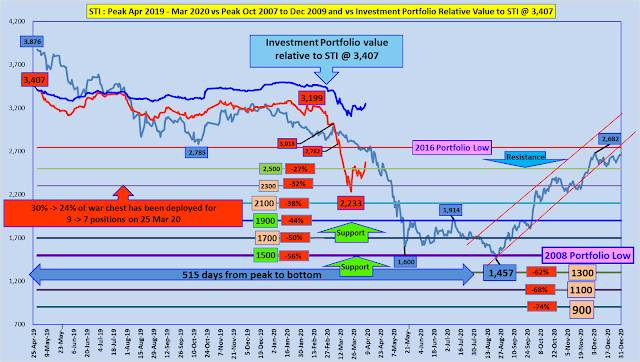 Master Yoda : Don't use your CPF, Luke, Let go. You will hit your financial goal if you are patient and let the money grow. Trust me! 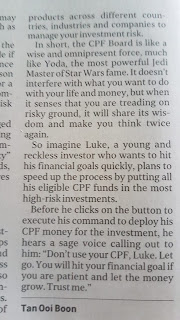 1.  54% or 267K CPF members actually did worse than those didn't invest the money they had i their CPF.

Statistically, someone on either on your left or right as retail investor did worse than savers!

Don't laugh or poke at those choose NOT to invest their CPF money. In CPF, we trust! 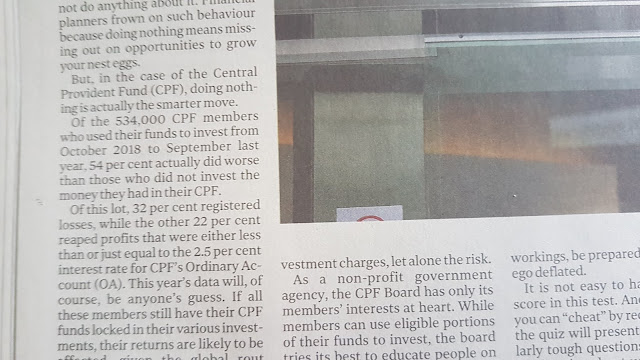 Introducing the Hen into this famous story of Wolf (COVID-19) and Three Little Pigs!

The Hen  ....  convincing the three little pigs on FIRE or Early retirement on leveraging on broker's margin account for higher yield stocks is a good idea! Passive income. Shiok!

How many can tell the difference between involved and committed? 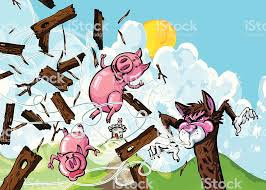 
Bet your war chest at which level of betting?

Strong support seen at 1,8XX and stronger one at 1,4XX 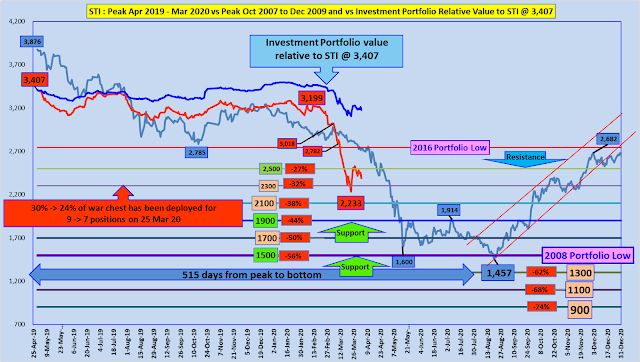 Fundamental Analysis : As Outsiders How Far Into The Future Can We Analyze Company Business? (2)


Read? Fundamental Analysis : As Outsiders How Far Into The Future Can We Analyze Company Business?

31 Mar 2020 was the last day of this F&B outlet in Orchard area and permanently closed to cut operating losses?

Retirement Income for Life??? (8) - Right Time To Refresh After 7 Years During Bear Market


Personal investing. Personal retirement planner. It is all personal! LOL!

A piece of common wisdom we often read from financial or investment bloggers that reaching the edge of financial freedom is when our passive income from investment portfolio exceeds our living expenses.


Can a portfolio full of high yield dividend stocks guarantee you a secure and sustainable future cash flow to overcome inflationary impact in your future living expenses?


Sometime in life, it may be better to regret NOT making more than to feel sorry in bad state!

Rotting cash reserve in the bank earning very low return as liquidity to fund few years of household expenses and to avoid any asset draw-down during market low! 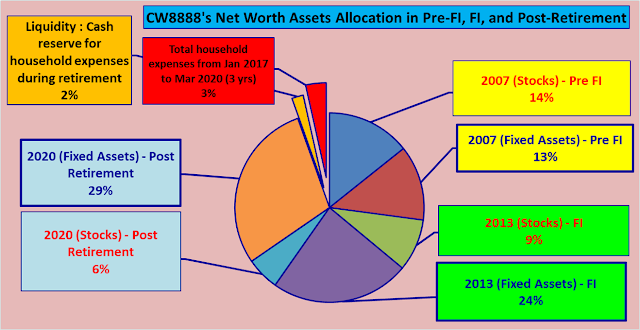 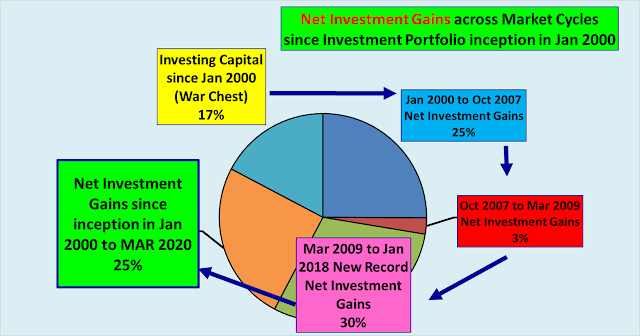 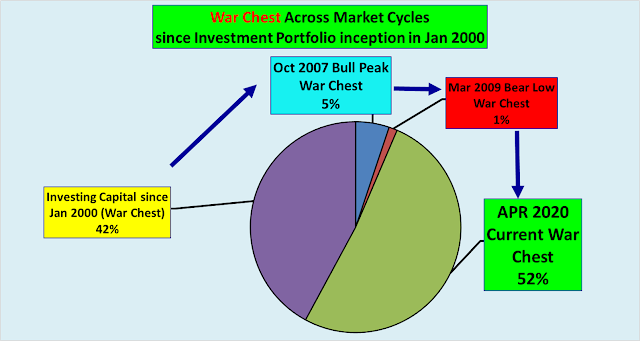 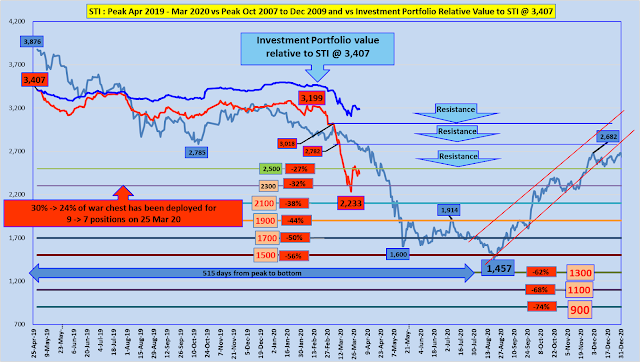 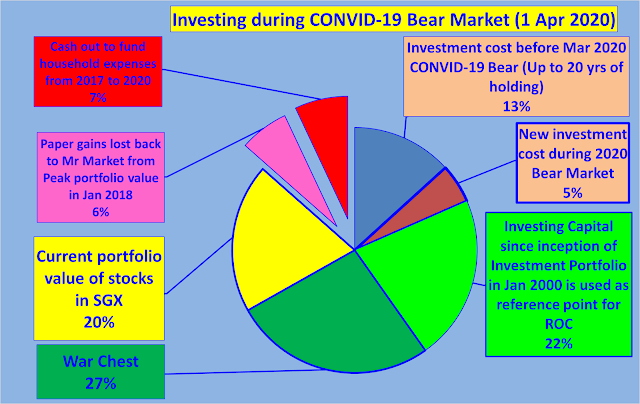