Police confirmed that more than 20 reports have now been lodged against Mr Ang. The alleged victims, mostly in their 20s and early 30s, have set up a WhatsApp chat group to share information.
Their losses are estimated to total more than $1 million, according to fellow victim Lau Cheng Yi. The 22-year-old, who runs a food and beverage business, lost about $55,000 in cash and three luxury watches valued at $72,000 in total.

CW8888 : Don't Be A Yield Pig!
"He promised returns of 2 to 10 per cent every month," said Mr Lau. "I did not get a single cent and he is now uncontactable."
CW8888: Anyone who claims that he/she can show you better investment return from these world best known investors is a damn RED FLAG! It doesn't matter whether it is course, scheme, methodology or strategy. 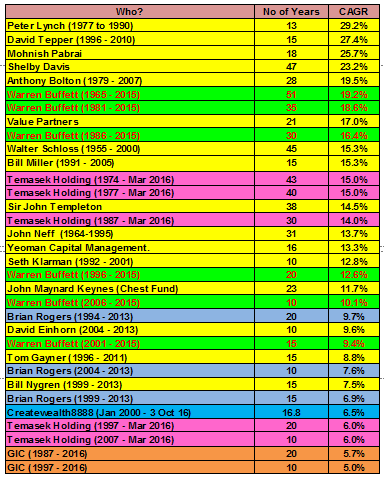 Mr Lau said he met Mr Ang in March at a roti prata restaurant in Upper Bukit Timah. "He came in a Nissan GTR sports car and was wearing Louboutin shoes and a Rolex watch," Mr Lau said.
Attracted by the promise of "risk-free returns", Mr Lau handed over his Audemars Piguet Las Vegas watch worth more than $30,000 on the spot. A day later, Mr Ang opened an online account for Mr Lau at the Keystone Trading website with 20,000 credits to his name.
Over two more months, he progressively invested more money after being persuaded. By June, he had put in $127,000.
He sensed something was amiss that month when the website was down. He met Mr Ang at the void deck of his Bangkit Road Housing Board flat. He said Mr Ang claimed that his boss - "Sky" - had run away with the money and promised to look for him to return it.
Other victims said Mr Ang assured them the betting programme was legal as the bets were not placed in Singapore, but through Keystone Trading's offices located in Shenzhen, China, and the United States.