SPH : Calling off REIT IPO due to lack of interest from BBs??? 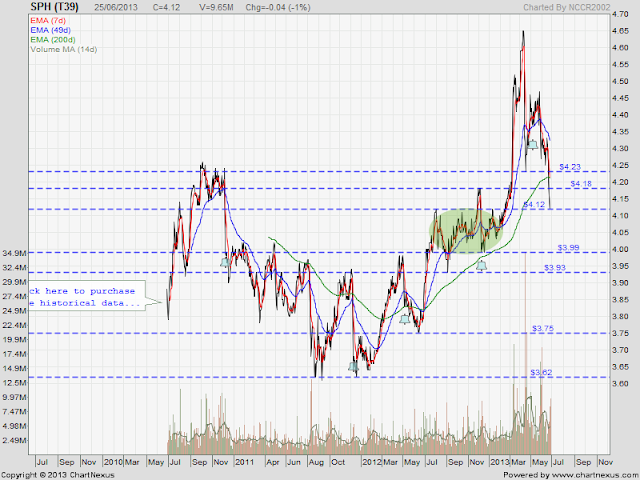 The offering was expected to raise as much as 540 million Singapore dollars (US$423 million).

SPH's decision comes as other companies in Asia either scrap or scale back planned offerings due to falling markets that have pushed share prices of some new trust listings sharply lower.

Jittery global investors have dumped emerging market stocks and currencies in recent weeks due to indications that the U.S. Federal Reserve may being winding down its monetary stimulus later this year. A liquidity crisis China's financial system and the country's slowing economic growth have also darkened investors' moods.

SPH had planned to start taking orders from institutional investors this week, one of the people with knowledge of the matter said. It still plans to proceed with the offering when the time is right but the delay to order-taking means the REIT isn't likely to list in early July as originally planned, another person said.

A company spokesman told The Wall Street Journal that the company is "monitoring market conditions and will make an announcement at the appropriate time."

The company last week secured shareholders' approval for the REIT, which would own two of the company's Singapore shopping malls, the Paragon and Clementi Mall.

SPH had hoped to benefit from investors' strong interest in trusts. Dividend-paying investments such as REITs had been in demand in recent years as monetary stimulus from central banks in developed markets kept interest rates low.
Posted by Createwealth8888 at 21:22