Share
Keppel Offshore & Marine Ltd (Keppel O&M) through its subsidiaries Caspian Rigbuilders BV (an affiliated company of Keppel FELS) and Caspian Shipyard Company (CSC), has secured a contract from Caspian Drilling Company Ltd, a subsidiary of the State Oil Company of Azerbaijan Republic (SOCAR), to build a semisubmersible drilling rig, which includes owner furnished equipment, worth about US$800 million.
Scheduled for delivery in 4Q 2016, the rig will be built to Keppel FELS' proprietary DSSTM 38M design, which has been customised for the Caspian Sea's harsh environment condition.

The DSSTM 38M is designed for a drilling depth of up to 40,000ft and operations in 1000m water depth. To meet the customer's requirements, it has been outfitted to include an 800m self-contained eight point mooring system designed to meet high wind speeds in the harsh Caspian environment. The pontoons have been designed for the rig to transit in channels with shallow draft of less than seven metres.

Mr Tong Chong Heong, CEO of Keppel O&M said, "Keppel O&M will harness the synergies of its global network of yards in the design and construction of this rig."

Keppel's yard in Azerbaijan, CSC, will carry out the fabrication, integration, testing and commissioning of the rig while its joint-venture yard with SOCAR, Baku Shipyard LLC, will undertake part of the fabrication of the pontoons and columns. Keppel FELS will provide engineering, procurement and technical support.

"Keppel O&M has built up a strong track record in delivering significant projects for Azerbaijan and this latest order is an affirmation of our abilities to deliver to our customer's need. Having operated in Azerbaijan since 1997 and developed a strong partnership with SOCAR, we understand the requirements for rigs to operate in the Caspian environment.

"This is an important market with great potential which is why we have added another yard, Baku Shipyard, to our capabilities here. Together, our yards are able to provide value-added solutions and extend our offerings for the Caspian Sea. We have tailored the DSSTM 38M design as a cost-effective rig equipped with the latest safety and environmental features to operate efficiently in the Caspian Sea," added Mr Tong.

Jointly developed and owned by Keppel's Deepwater Technology Group and Marine Structure Consultants, the DSSTM 38M design is an enhanced design of the successful DSSTM 38 rigs that are operating in Brazil.

The President of SOCAR, Rovnag Abdullayev, said, "We are keen to expand our offshore drilling programme to drill wells such as the Babak and Absheron fields in addition to the Shah Deniz field. We have ordered the first of our new next-generation rigs from Keppel. We are confident that the Keppel-designed rig is a robust and efficient rig that will increase our offshore drilling capabilities."

The Caspian Sea holds a tremendous amount of untapped oil and gas reserves and Azerbaijan is the largest offshore producer in the region of both oil and gas. SOCAR stated recently that it intends to build more rigs in the near future.

CSC is the most established yard in the country and has a track record of completing rigs for the Caspian Sea, having delivered the first semisubmersible (the DSSTM 20 Maersk Explorer, renamed the Heydar Aliyev), jackup rig (Transocean's Trident 20 jackup rig) and ice-class Floating Storage and Offloading (FSO) vessel built in-country. This was done in collaboration with its sister yards in Singapore which fabricated modules that were then shipped through the narrow Volga Don Canal for completion at CSC.

The above contract is not expected to have any material impact on the net tangible assets and earnings per share of Keppel Corporation Limited for the current financial year. 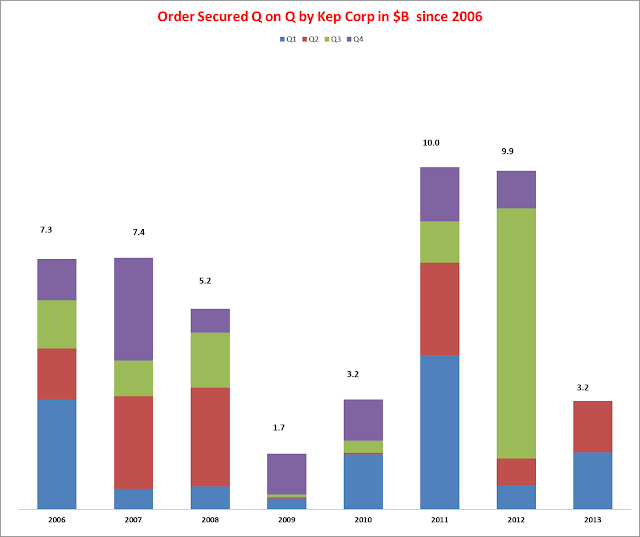