The poor goal hit was due to lack of new trading positions in the quarter and rolling forward the realization of profits to next quarter for Olam and Noble.

Since Nov 08 after I have given up active contra trading and revised my active investing/trading strategies.

Performance indicators are as follows:

But at one stage in this quarter, CAGR has dropped to a new low at 16.3% 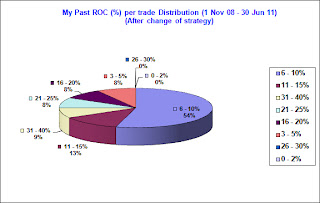