The Perfect Income for Happiness? Try $227K for Singapore residents

More than one study has tried to determine the financial price of happiness. Some look at wealth. Others look at income.

One well-publicized study last year put the optimal income for happiness at around $75,000. Rising income, it turns out, produces greater happiness until you get to around $75,000. After that, there are diminishing returns, with more income leading to little or no gain in real happiness.


This is a fraught question, of course. "Happiness" itself is not easily defined, and money, as the winners of this week's Powerball jackpot will tell you, doesn't always guarantee it. And the financial requirements for happiness usually depend on geography, peer groups and other external factors.


The latest to weigh in on the issue is Skandia International's Wealth Sentiment Monitor. It found that the global average "happiness income" is around $161,000 for 13 countries surveyed. The United States wasn't specifically measured. 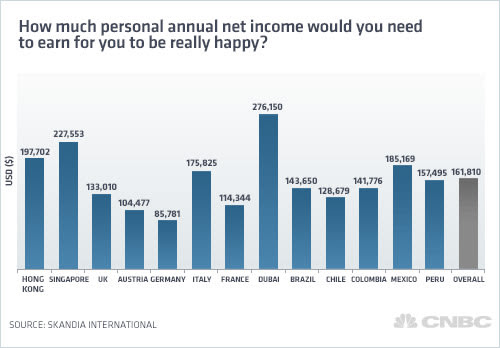 But there was a wide range of answers depending on the country. Dubai residents need the most to feel wealthy. They said the needed $276,150 to be happy. Singapore came in second place, with $227,553, followed by Hong Kong, with $197,702.

Singaporeans took the lead on the "wealth" needs, with $2.91 million needed to feel wealthy. Dubai ranked second with $2.5 million, followed by Hong Kong with $2.46 million.

Surveys show that among Americans, most say they need $1 million or more to feel wealthy.

All of this shows that wealth and financial happiness is not an absolute number, but is relative to your peers and surroundings. Living in Dubai, with all those oil barons and oligarchs, the needs are higher. In Germany, where wealth is more evenly distributed, the needs are not as high.