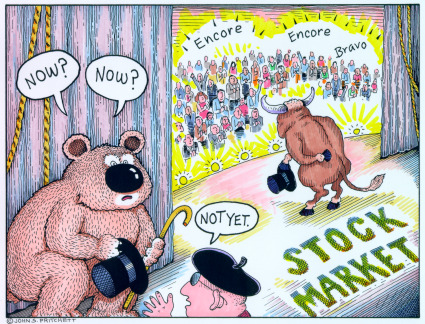 Stocks reversed earlier losses to close higher for a third-straight session Tuesday, with the Dow and S&P 500 extending their recent multi-year gains, ahead of a busy week of corporate earnings and amid hope for a deal on the debt ceiling.

The Dow Jones Transportation Average rallied to a historic high for the fifth-straight session, soaring more than 8 percent in January, largely boosted by airlines.

The CBOE Volatility Index (VIX), widely considered the best gauge of fear in the market, ended unchanged around 12.
Markets were closed Monday for Martin Luther King Day. On Friday, the Dow and S&P 500 climbed to finish the week at their highest levels since December 2007 and all three major averages logged their third-straight weekly gain.