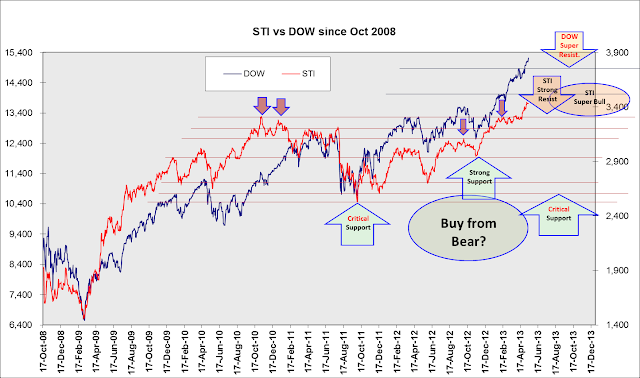 NEW YORK (Reuters) - Stocks rallied to fresh highs on Tuesday as investors picked up large-cap companies' shares on the expectation that central bank stimulus will help propel the rally further.

Gains were broad, but growth sectors outperformed their peers with bank stocks leading the way. Bank of America (BAC.N), up 2.8 percent at $13.34, was the Dow's biggest percentage gainer, while Citigroup Inc (C.N) rose 2.4 percent to $50.09.

Wall Street has rallied without a significant correction since the start of the year, pushing major indexes to all-time records and sending the S&P 500 up almost 16 percent for 2013 so far.

The ascent has been driven in large part by the Federal Reserve's easy monetary policy, designed to stimulate the economy, though investors' focus has turned to when the Fed may start to rein in its bond-purchase program.

"The developed economies of the world are all easing aggressively, the money is looking for a home, and it's ending up in the stock markets," said Bucky Hellwig, senior vice president at BB&T Wealth Management in Birmingham, Alabama.

For now, investors are betting that the central bank will be careful not to remove its support too soon in order to not disrupt the economic recovery it is trying to foster, Hellwig said.

So far, declines in the market have been met with buying and investors are trying to gauge how long that can last.

"People are indeed trying to participate in the rally, but at the same time, they're trying to be cautious," said Brad McMillan, chief investment officer of Commonwealth Financial, based in Waltham, Massachusetts.

The market had traded sideways for the past three sessions, showing a gain of just 0.07 percent as the winding down of the quarterly earnings season and a light economic calendar have left investors without a strong catalyst for further gains.


Most corporate earnings have been better than expected this quarter. With 90 percent of the S&P 500 companies having reported results so far, 67.2 percent have topped earnings expectations, according to Thomson Reuters data, which is even with the average over the past four quarters. However, only 46.9 percent have beaten revenue expectations, below the 52 percent average over the past four quarters.

Volume was roughly 6.2 billion shares on the New York Stock Exchange, the Nasdaq and the NYSE MKT, just below the average daily closing volume of about 6.4 billion this year.

Advancers outnumbered decliners on the NYSE by a ratio of about 2 to 1, while on the Nasdaq, more than two stocks rose for every one that fell.