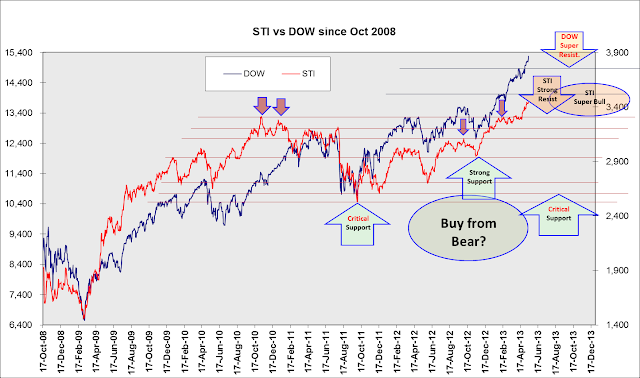 
Stocks regained their footing in choppy trading Wednesday, with the Dow and S&P 500 closing at a fresh high, but a sharp decline in Apple kept a lid on the Nasdaq's gains.

The CBOE Volatility Index (VIX), widely considered the best gauge of fear in the market, traded near 13.

But shares of Apple's rival Google

The day's gains were broad, with nine of the S&P 500's 10 sectors ending higher. Among the top gainers were the consumer staples sector index <.splrcs>, up 1 percent, and the financial sector <.spsy>, also up 1 percent. The only decliner was the energy sector index <.spny>, down 0.4 percent.

The overall market showed further signs of strength despite the S&P 500 rising to a record for the fourth session in a row. The broad market index has recorded 15 new closing highs this year.

An options gauge looking at the level of anxiety showed signs that investors are placing optimistic wagers on the stock market, positioning for the current run-up to extend for the next three months.

Such policies have helped spur advances of about 15 percent in major U.S. indexes this year despite data showing some signs of lackluster growth.

In the latest reads on the economy, activity in New York state's manufacturing sector unexpectedly contracted in May. Another report showed that U.S. industrial production fell more than expected in April.

"It's disconcerting that the data was so much lower than what we were looking for, but there's no reason for investors to sell," said Michael Binger, senior portfolio manager at Gradient Investments in Minneapolis.

"The main things driving the market - the Fed, earnings, consumer confidence - are holding up, and people put money in the market on any down day. I still see a lot of value."

In signs that the rally may strengthen from the current levels, the Credit Suisse Fear Barometer, known as the CSFB Index, fell 11.4 points over the past two weeks - the largest decline on record - and is now at a one-year low of 21.73.

"A low CSFB reading is a constructive signal for the market," Credit Suisse equity derivatives strategist Mandy Xu wrote in a note to clients.

Agilent Tech was one of the S&P 500's top percentage gainers, up 3.9 percent to $45.68, a day after the company posted adjusted earnings that beat expectations and doubled its stock-buyback program to $1 billion.


Tech shares also got a lift from Netflix Inc

In other data released on Wednesday, the U.S. Producer Price Index recorded its largest drop in three years in April, falling a seasonally adjusted 0.7 percent.

Volume was roughly 6.6 billion shares on the New York Stock Exchange, the Nasdaq and the NYSE MKT, above the average daily closing volume of about 6.3 billion this year.

Advancers outnumbered decliners on the NYSE by a ratio of 8 to 7, while on the Nasdaq, about 14 stocks rose for every 11 that fell.
Posted by Createwealth8888 at 07:22