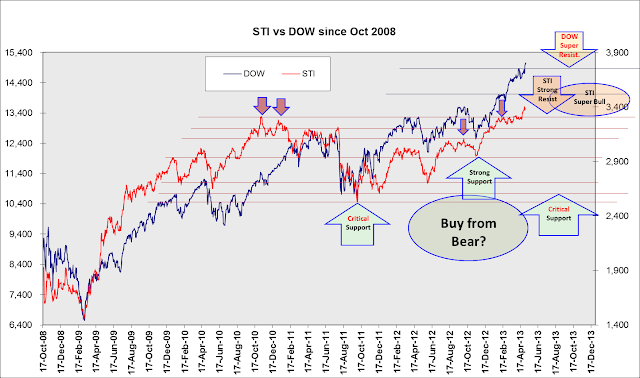 NEW YORK (Reuters) - The Dow closed above 15,000 for the first time on Tuesday and the S&P 500 ended at another record high, extending the market's rally as more investors rushed to join the party and German industrial data beat expectations.

It was the fourth straight record close for the S&P 500. Both the Dow and the S&P 500 hit intraday record highs as well.

"People are concerned they're missing the boat if they're not fully invested in the stock market right now," said Eric Kuby, chief investment officer of North Star Investment Management Corp., in Chicago.

Information technology bucked the trend, however, with Apple (AAPL.O) shares declining after three days of gains. The stock ended down 0.4 percent at $458.66, while the S&P 500 technology index (.SPLRCT) dipped 0.2 percent.

Investors' sentiment was buoyed early in the day by data from Germany, Europe's largest economy, which reported a 2.2 percent increase in industrial orders in March, compared with expectations for a drop of 0.5 percent.

"Markets haven't really been anticipating much of a recovery in Europe ... If we see any type of slight improvement in the euro-zone economy, it may add more fuel to the strong move we've already seen in equities," said Sean Lynch, global investment strategist for Wells Fargo Private Bank in Omaha, Nebraska.


The U.S. stock market's gains so far have come on strong corporate results and accommodative monetary policies from the Federal Reserve, two factors that may now be priced into markets. Last week's jobs report was unexpectedly strong and helped to drive stocks' advance.

Stocks this year have gone without a sustained pullback as investors use any market decline to add to positions.

Many analysts expect markets to trend higher, but some see a near-term pullback, citing a lack of positive catalysts and mixed economic data.

Both Fossil Inc (FOSL.O) and DirecTV (DTV.O) reported earnings that surged beyond expectations. Fossil's stock jumped 9 percent to $107.88 and ranked as the No. 1 percentage gainer in the S&P 500. DirecTV shares shot up 6.9 percent to $61.95.

Earnings have largely been better than expected. About 68.5 percent of S&P 500 companies have surpassed estimates so far. At the same time, revenues have been disappointing.

Volume was roughly 5.8 billion shares traded on the New York Stock Exchange, the Nasdaq and the NYSE MKT, below the average daily closing volume of about 6.4 billion this year.

Advancers outnumbered decliners on the NYSE by a ratio of more than 3 to 1, while on the Nasdaq, five stocks rose for every three that fell.