Share
Will STI play lots of catch up with Uncle DOW??? 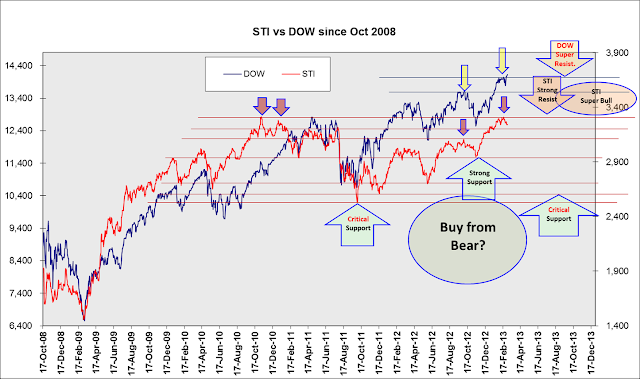 
Stocks ended near session highs in choppy trading, with the S&P 500 finishing in positive territory for the first Monday in 2013 and the Dow close to hitting its record closing high, as investors shook off earlier worries over China and a lack of progress over the sequester.

The CBOE Volatility Index (VIX), widely considered the best gauge of fear in the market, fell near 14.

"The S&P 500 is currently fewer than 50 points away from its all-time closing high of 1,565, [but] if history is any guide...the S&P 500 may have little time to rejoice following the setting of a new record high before collapsing once again, as the median advance following the recovery to break even from bear markets since World War II has only been three percent before stumbling and falling into another meaningful decline within only two months," wrote Sam Stovall, chief equity Strategist at S&P Capital IQ.
Among the key S&P sectors, utilities ended higher, while energy finished in the red.

The $85 billion spending cuts officially started taking effect over the weekend. While stocks so far have largely ignored the concerns over the sequester, analysts say signs the cuts are beginning to impact the economy could eventually move markets.
Over the weekend, House Speaker John Boehner said he and President Barack Obama had made no headway on a deal to avoid automatic budget cuts. Meanwhile, House Republicans are expected to introduce a bill to extend government funding through September, to avoid a government shutdown at the end of the month.

The Shanghai Composite tumbled to its lowest level in six weeks after the Chinese cabinet announced an increase in down payments and loan rates for buyers of second homes in cities where prices are rising too quickly.