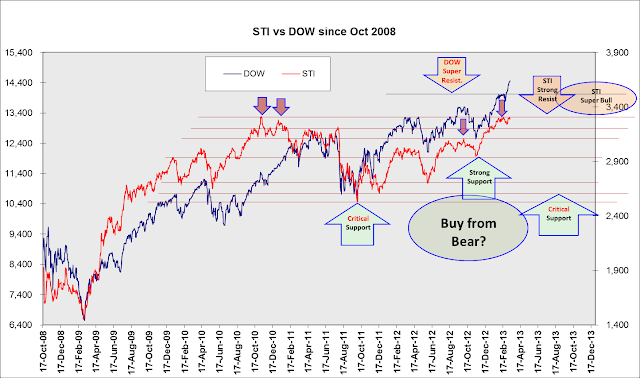 NEW YORK (Reuters) - U.S. stocks edged up on Wednesday, with the Dow rising for the ninth straight session to another record, buoyed by surprisingly strong retail sales that suggested the economy is gaining momentum.

But trading volume was light. Moves have been muted in recent days as investors consolidate positions after a strong run-up in the first three months of the year. Still, weakness in stocks has been met with buying, which helped propel the market's advance.

"I think we will soon see the S&P at all-time high levels. I don't think the market has topped yet, and there is still strength to move the market higher," said Ari Wald, technical strategist at C&Co/PrinceRidge in New York.

"Will we see a correction of 10 percent or so soon? Not imminently. We have not seen a divergence of behavior yet where participants become more selective on which stocks to buy."

Signs of strength in the economy and the Federal Reserve's easy monetary policy have helped U.S. equities accelerate their advance. The blue-chip Dow is up 10.3 percent for the year and the benchmark S&P 500 index has gained 9 percent.

Wednesday's retail sales report reinforced the view that the U.S. economy has momentum, even with the obstacles the recovery is facing. Sales increased 1.1 percent in February, the largest increase since September.

Investors had been looking for signs of any impact on spending from stubbornly high unemployment and a higher payroll tax that went into effect at the start of the year.


Coach (COH.N) shares rose 1.8 percent to $49.67 after Citigroup raised its rating on the luxury leather goods company's stock to "buy" from "neutral.

But Express Inc (EXPR.N) shares slid 3.2 percent to $18.25 after the apparel retailer posted fourth-quarter earnings and said it was off to a slow start in the first quarter.

Volume was below average, with roughly 5.5 billion shares trading on the New York Stock Exchange, the Nasdaq and the NYSE MKT, compared with the 2012 average daily closing volume of about 6.45 billion.

Advancers outnumbered decliners on the New York Stock Exchange by a ratio of 17 to 13. On the Nasdaq, the positive breadth was slightly wider, with about seven stocks rising for every five that fell.