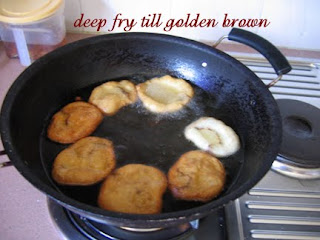 Many years ago at the former Maxwell market, there was a hawker stall selling "hum chim peng" at 10 cents per piece (small version) while other stalls elsewhere were selling at 20 or 30 cents per piece (larger version).

It was quite obvious that the profit margin from selling "hum chim peng" at 10 cents per piece was much thinner.

Guess what happened to the customers' buying pattern of "hum chim peng" at this stall?

When the price of "hum chim peng" was only 10 cents per piece, customers didn't buy a few pieces; but they bought in units of 10, 15 and 20 pieces.

I usually bought 10 pieces and ate a few pieces myself and the rest passed around to colleagues as treat. May be psychologically I didn't want to be seen as cheapskate so I bought more.

If the "hum chim peng" was 30 cents per piece, I would just buy enough for myself.

This hawker was able to move massive volume of his product to make up for the razor thin margin. The only difference was that he got to work harder.
Posted by Createwealth8888 at 10:54