Did you became the Investment Eagle and fly high? 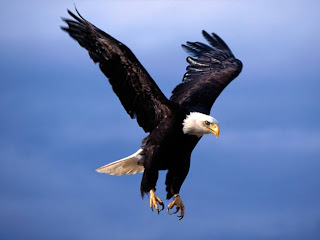 The Story of the Bald Eagle continues after 40 years later ....

40 years later, the old Eagle will re-make itself so it can fly high again for next 30 years. This is incredible!


The bald eagle has the longest life-span of its' species. It can live up to 70 years. But to reach this age, the eagle must make a hard decision in its' 40's.

Its' long and flexible talons can no longer grab prey which serves as food.

Its' old-aged and heavy wings, due to their thick feathers, become stuck to its' chest and make it difficult to fly.

Then, the eagle is left with only two options: die or go through a painful process of change which lasts 150 days.

The process requires that the eagle fly to a mountain top and sit on its' nest.

There the eagle knocks its' beak against a rock until it plucks it out. After plucking it out, the eagle will wait for a new beak to grow back and then it will pluck out its' talons.

When its' new talons grow back, the eagle starts plucking its' old-aged feathers.

And after five months, the eagle takes its famous flight of rebirth and lives for 30 more years.

Learn from the Bald Eagle. It will re-make itself after its first-half and spreads out its wings and fly high again in the next half of its life.

The moral of story to be continued ... hope to be pretty soon...but again it will depend on market condition. hee hee