By TEH HOOI LING
SENIOR CORRESPONDENT

THE Straits Times Index has risen by 12 per cent so far this year. At a lunch this week, a friend commented that only the blue chips or the big-cap stocks have participated in the rally so far. Many of the small-cap stocks are still in the doldrums.

Blue chips are unlikely to lose 90 per cent of their market value as some smaller caps do, when their businesses are permanently impaired following a drastic change in environment.

I was curious as to whether that is indeed the case. So I decided to find out the prices of the stocks on the Singapore Exchange relative to their three and five-year highs and lows.

Overall, Singapore stocks are currently trading at a median 84 per cent higher than their three-year low, registered mostly in March 2009. Relative to the three-year high hit in April 2010, the median stock is still 39 per cent below that level.

But if we take only stocks with trading history that go back either three years or five years, then the median appreciation from the three-year low - also in March 2009 - is 94 per cent; while relative to the peaks April 2010, the median price level is still 39 per cent below that. 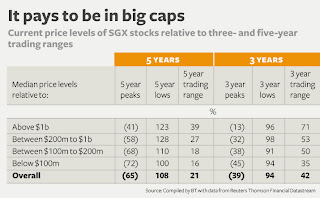 From the table, you can see that the bigger the market cap of a stock, in general the better it performs relative to its three- and five-year lows and highs.

The smaller the stock gets, the greater the distance they are from their peaks. For stocks with market cap of $200 million to $1 billion, the median price is 58 per cent from the five-year peak.

As for the bounce from the troughs in the last five years, again there is a strong correlation between size and the strength of the bounce.

That's about the optimal size investors should go for if they seek growth. Any smaller, and the chances of any rebound from a crisis will be greatly diminished.

For stocks with market caps of $100 million to $200 million, the median current price levels is 110 per cent above the troughs, and for stocks smaller than that, it is 100 per cent.

The pattern is similar for the trading range over the last three years. Relative to their three-year peaks, stocks above $1 billion market cap have a median price which is only 13 per cent lower.

Again the micro caps are in general still very depressed, with a median price level which is 45 per cent below their recent peaks.

So what is the takeaway? For me, it is clear that size offers a safety feature that small caps don't have. Yes, during a crisis, a bear market, the likes of CapitaLand or Keppel Corp may fall along with the general market. But it is unlikely that they will lose 90 per cent of their market value as some of the smaller caps do, when their businesses are permanently impaired following a drastic change in the business environment.

And when the recovery comes, it is almost a certainty that the likes of Jardine Cycle & Carriage, and Dairy Farm will rebound back strongly. People will continue to buy cars, and they will continue to shop at Cold Storage.

Meanwhile, small caps have another obstacle working against them. Because of the sheer number of such stocks, some may get neglected even if their fundamentals are good. In circumstances like that, the sponsors are inclined to privatise the outfit and the exit price for retail investors sometimes may not even approach the fair value of the company.

So there is a tendency for good small caps to be taken out of the market, leaving the less desirable ones in the market.

On the whole, I'd say it is sounder to just stick to the established names and ride the ups and downs of the market with them.