Uncle8888 has been trying to understand this:

Where does the money from stock market come from?

Uncle8888 also remembered Warren Buffet once said: "The Stock market is a financial redistribution system. It takes money away from those who have no patience and gives it to those who have."

He believes it is true. So he understands it is important to be patient; or else he may end up distributing part of of his hard-earned salary to other people in the stock market.

Luckily, his favourite hobby is fishing and fisherman by nature will has more patience.

With the understanding where does the money from the stock market come from, it will be easier for Uncle8888 to understand why some people may choose to do short-term trading and/or  long-term investing

Why do people come to stock market?

Some people come to the market to do short-term trading and their primary focus is to MAKE money in the stock market; and they are rarely motivated by stock dividends.

Once they realized that making money in the stock market is not easy. Some of them may give up or cut down on doing short-term trading and change their strategy. Most likely, these people may cross over to doing more long-term investing and less short-term trading.

So what is long-term investing?

Uncle8888 thinks that generally there are two camps of people doing long-term investing.

One camp belongs to the Cowboys and the Farmers.

Read The Cowboys.  The primary objective of cowboys is to receive money from companies in the form of stock dividends either over quarterly, semi-annual or yearly. It is true that cowboys will feel happy or at least feel quite satisfied with their Returns on their investment. If you don't believe it; then you may want to visit some investment blogs, forums, or chatboxes and you may be able spot a few cowboys expressing their joy publicly that they will be receiving some stock dividends from XYZ companies soon.

The Farmers have the same primary objective as the Cowboys except they are not into REITs or Biz Trusts; they like to receive money from some fundamental strong companies which are known to be consistently paying out good stock dividends.

The other camp belongs to the D.O.G. ( Read on Graham's Investing?)

Who are doing long-term investing?

Uncle8888 thinks that there are three possible types of long-term investing.

They at first came to the stock market to do short-term trading; but when their positions got stuck. They managed to convince themselves that they are in long-term investing. If they happened to receive some stock dividends; they will console themselves that the Returns from their investment have beaten the Bank's FD rate.

The Cowboys, Farmers and D.O.G are the ones doing intentional long-term investing. They clearly know what they are doing in the stock market.

So what is Uncle8888 doing in stock market?


Then how come Uncle8888 can be holding stocks for many years when he didn't intend to do any long-term investing in the first place?

The process of evolutionary long-term investing is best described with the following stories:.

Read Do you know where are rocks? (stocks)

The moral of the story: Know where are the rocks and step on them.

Read Opportunity In The Stock Market?

The moral of the story: Opportunities in the stock market rarely come by so learn to recognize them and stop habitually throw them away.

The moral of the story: How to have the Cake and still eat it?

Answer: Buy another same Cake to eat. Now you will have the Cake and also have eaten it.

The process of evolutionary long-term investing by Uncle8888 can be simply stated as follows:


Does short-term trading and long-term investing work for Uncle8888?

He has been doing short-term trading and long-term investing on Kep Corp since 2001. Read ? Kep Corp and his realized profits and stock dividends received on Kep Corp alone will be more than enough to cover ALL expenses to be spent for 4-year University study course at SMU and NUS for his two kids.

The moral of the story: Be Focus. One may be Enough.

Uncle8888 is not a high income earner

Since he is not high income earner, he can't depend on saving MORE for retirement fund. He has little choice but to find other means to supplement in building up his net worth for his retirement needs. He tries to do it through his short-term trading and evolutionary long-term investing strategy by taking whatever money he has on hand and made it works harder.
Uncles8888's current Net Worth as on 11 Feb 2011, Friday, SGX closing. 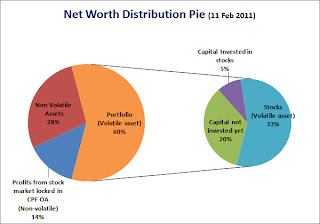 As you can see from the Pie chart above, 47% of his net worth comes from making and receiving money from the stock market. 14% of this money is locked in CPF OA to generate 2.5% Compound Interests and the other 33% is re-invested back into the volatile stock market.

Can Uncle8888's investing strategy works for you?
Believe not?

(But, not the same as the other way round hor)