Opportunity exists in a crisis 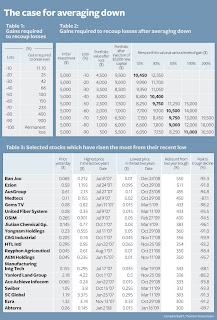 Have a clear plan so that at the darkest hour, you can overcome inertia and won't miss out on market recovery
By TEH HOOI LING
SENIOR CORRESPONDENT

IN an article contributed recently to the monthly investment magazine Pulses, a relatively young man reflected on what he has learned in his four years as a financial planner.

He joined the industry at the right time - in 2004 - and rode the market all the way up. That is, until last year. He also gained more than a few insights into investing and financial planning in the past 12 months or so. 'For the longest time I have been a strong advocate of investing-for-the-long-term,' he said. 'However, I also realise that while it is not difficult to claw back a 20 per cent loss - you need a gain of 25 per cent) - it is an increasingly uphill and uneven task to claw back deeper losses.

'Table 1 below clearly illustrates that capital preservation is key. It makes sense to cap losses to the 20 to 30 per cent mark. After all, we can still get our foot out if we fall into a drain. But drop into a manhole, that's a different story. For example, if a stock you own has fallen 80 per cent, from that level it would have to climb 400 per cent for you to recoup your capital.'

The point is to cut the loss after 20 to 30 per cent. But for those who did not cut loss and watched in horror as their investment shrank by the day to, say, only 10 per cent of its original value, the tendency at that point was either to finally throw in the towel or to do nothing. By then, few would have the presence of mind to scoop up more shares at much reduced prices.

As Jeremy Grantham of GMO puts it in his letter in March: 'It was psychologically painful in 1999 to give up making money on the way up and expose yourself to the career risk that comes with looking like an old fuddy duddy. Similarly today, it is both painful and career risky to part with your increasingly beloved cash, particularly since cash has been so hard to raise in this market of unprecedented illiquidity. As this crisis climaxes, formerly reasonable people will start to predict the end of the world, armed with plenty of terrifying and accurate data that will serve to reinforce the wisdom of your caution.

'Every decline will enhance the beauty of cash until, as some of us experienced in 1974, 'terminal paralysis' sets in. Those who were over-invested will be catatonic and just sit and pray. Those few who look brilliant, oozing cash, will not want to easily give up their brilliance. So almost everyone is watching and waiting with their inertia beginning to set like concrete. Typically, those with a lot of cash will miss a very large chunk of the market recovery.'

Indeed, at the darkest hour of the crisis, when most people had become disillusioned, the market turned. And what a turn it has been so far. From their two-year lows - most of which were registered between October last year and March this year - Singapore-listed stocks have on average risen a whopping 110 per cent. The median increase is 91 per cent.

But wait, here's some perspective. From their two-year peaks - most of which were hit in 2007 - the stocks have fallen by an average of 78 per cent to their troughs. The median decline is 83 per cent. So the explosive rebound we've seen so far didn't even bring prices back to the halfway point between the peak and the trough. Had investors invested at peak prices, and done nothing since then, they would still be sitting on a 58 per cent loss.

As the financial planner noted, prices would have to jump by some 400 per cent before one can recoup one's losses after enduring an 80 per cent loss.

But what if, as Mr Grantham advised, we had a plan to cure our terminal paralysis in the darkest hours of the market? 'It is particularly important to have a clear definition of what it will take for you to be fully invested,' he said. So suppose you had that plan, and at the trough you recognised it as that, and you duly deployed new capital into the market. Where would you be today?

In Table 2, I listed where an initial portfolio of $5,000 would be after various levels of losses. Then I assumed an equal amount of new capital were injected into the assets at the significantly lower market price. And from that low level, I presented various scenarios of market rebounds and where that would take the entire portfolio to.

From the table, you can see that if the stock has fallen 80 per cent, you would need it to rebound by two-thirds or 67 per cent to recoup your losses if you inject new capital equivalent to the initial investment at exactly the lowest point. If your loss is deeper at 90 per cent, the rebound would have to be 82 per cent for you to make back your capital. And if the market, as it has done in the past three months, rebounded by more than 100 per cent, you would be sitting on some profits now.

Indeed, many stocks here did provide investors with opportunities to more than make back their capital had they stuck to a reinvestment plan. Table 3 are some of them. Take Ausgroup. Its peak in the past two years was $2.13 on July 27, 2007. Just over a year later, on Oct 23, 2008, it traded at only 11 cents - a plunge in value of some 95 per cent.

Yesterday, it last traded at 61 cents. That's 455 per cent above its low of 11 cents but still 71 per cent off its peak. Someone who invested $5,000 in Ausgroup at its peak needed to put in only an additional $1,550 at the low to make back all their losses. Had they put in the same amount as their initial capital - that is, $5,000 - they would have made a return of almost 200 per cent on their entire capital of $10,000. That should be incentive enough to try to fight your fear.

Other stocks that have staged spectacular rebounds in the past three months or so included Osim, Yongnam, Yanlord, Swiber, SC Global and Ezra.

Of course, we should only pick stocks whose fundamentals have not been permanently impaired to average down. If not, we might just be throwing good money after bad, and eventually suffer permanent loss of capital should the company go bankrupt.

As we have witnessed time and again, in a crisis exists opportunity. So always keep a clear head and try to fight the fear and seize the value when the doomsday scenario is the only view out there. Yes, prices may go lower. Nobody can ever catch the low. But again, as Mr Grantham puts it: 'Sensible value-based investors will always sell too early in bubbles and buy too early in busts. But in return, you may make some important extra money on the round trip as well as lowering the average risk exposure.'
Posted by Createwealth8888 at 21:46