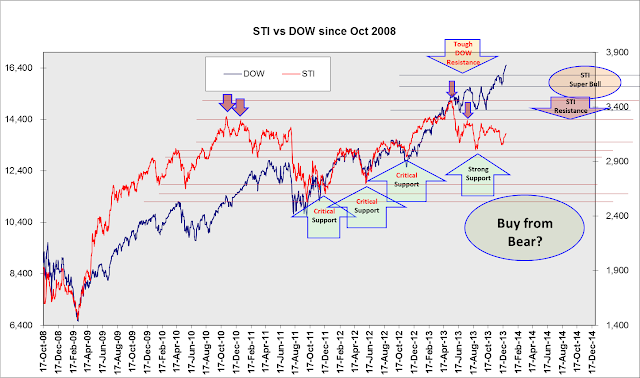 NEW YORK: The Dow Jones Industrial Average Monday kicked off a holiday-shortened week with a new record high, even as the other two indices stalled in sluggish trade.

"With a lot of people out, it probably will be a fairly quiet week," said William Lynch, director of investment at Hinsdale Associates.

The Dow has risen about four per cent since the US Federal Reserve announced on December 18 that it plans to scale back its stimulus in January.

With so many investors out and not many major economic releases this week, "there will be a lot of consolidation," Lynch predicted. "The market won't go much higher."

US pending home sales rose 0.2 per cent in November, the first rise in five months, but below the 1.5 per cent increase projected by analysts.

Economic releases later this week include reports on home prices and consumer confidence.
Cooper Tire & Rubber rose 5.4 per cent after announcing it had ended a proposed merger with India's Apollo Tyres. The deal, announced in June, became bogged down in legal sniping related to labor problems within Cooper's US and Chinese operations.

Footwear maker Crocs gained 21.1 per cent after announcing that Blackstone Group is investing US$200 million in the company and taking a 13 per cent stake. Crocs plans a US$350 million stock repurchase program.

Hewlett-Packard declined 0.4 per cent after it disclosed in a securities filing that the company is in "advanced discussions" to settle foreign-bribery investigations into its operations in Russia, Poland and other countries.

Dow component The Walt Disney Company rose 2.5 per cent following a strong performance of its film "Frozen" over the important holiday weekend.