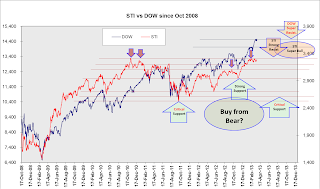 Stocks ended near their best levels Tuesday, with the Dow posting a new high and S&P 500 finishing less than 2 points from its closing peak.

Stocks moved higher on a handful of encouraging economic reports that pointed to an improving economy and as investors seemed to temporarily overlook worries in the euro zone.
The Dow Jones Industrial Average soared 111.90 points, or 0.77 percent, to close at 14,559.65, led by Intel and Hewlett-Packard. The blue-chip index posted a new record close.

The CBOE Volatility Index (VIX), widely considered the best gauge of fear in the market, ended below 13.