Since the most vital trend to understand is the primary trend, this leads into the third tenet of Dow theory, which states that there are three phases to every primary trend – the accumulation phase (distribution phase), the public participation phase and a panic phase (excess phase).

Let us now take a look at each of the three phases as they apply to both bull and bear markets. Primary Upward Trend (Bull Market) The Accumulation Phase The first stage of a bull market is referred to as the accumulation phase, which is the start of the upward trend. This is also considered the point at which informed investors start to enter the market.

The accumulation phase typically comes at the end of a downtrend, when everything is seemingly at its worst. But this is also the time when the price of the market is at its most attractive level because by this point most of the bad news is priced into the market, thereby limiting downside risk and offering attractive valuations.

However, the accumulation phase can be the most difficult one to spot because it comes at the end of a downward move, which could be nothing more than a secondary move in a primary downward trend - instead of being the start of a new uptrend. This phase will also be characterized by persistent market pessimism, with many investors thinking things will only get worse. 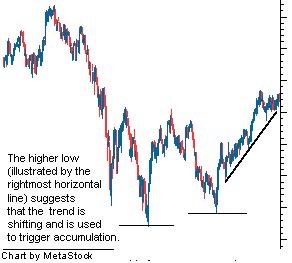 A new upward trend will be confirmed when the market doesn't move to a consecutively lower low and high.
Public Participation Phase
When informed investors entered the market during the accumulation phase, they did so with the assumption that the worst was over and a recovery lay ahead. As this starts to materialize, the new primary trend moves into what is known as the public participation phase. During this phase, negative sentiment starts to dissipate as business conditions - marked by earnings growth and strong economic data - improve. As the good news starts to permeate the market, more and more investors move back in, sending prices higher. This phase tends not only to be the longest lasting, but also the one with the largest price movement. It's also the phase in which most technical and trend traders start to take long positions, as the new upward primary trend has confirmed itself - a sign these participants have waited for.
Figure 2: the public participation phase 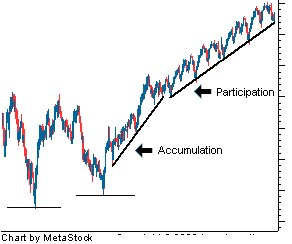 The Excess Phase
As the market has made a strong move higher on the improved business conditions and buying by market participants to move starts to age, we begin to move into the excess phase. At this point, the market is hot again for all investors. The last stage in the upward trend, the excess phase, is the one in which the smart money starts to scale back its positions, selling them off to those now entering the market. At this point, the market is marked by, as Alan Greenspan might say, "irrational exuberance".
The perception is that everything is running great and that only good things lie ahead. This is also usually the time when the last of the buyers start to enter the market - after large gains have been achieved. Like lambs to the slaughter, the late entrants hope that recent returns will continue.
Unfortunately for them, they are buying near the top. During this phase, a lot of attention should be placed on signs of weakness in the trend, such as strengthening downward moves. Also, if the upward moves start to show weakness, it could be another sign that the trend may be near the start of a primary downtrend.
Figure 3: the excess phase 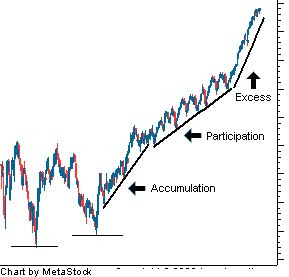 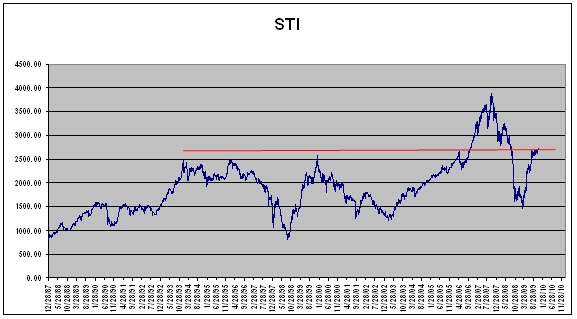 I believe Accumulation phase is over. So are we still in public Participation Phase or already in The Excess Phase? Recognizing it can make a huge difference to your portfoli management.
Posted by Createwealth8888 at 15:18